THIS book analyzes the simultaneous sea, land and air campaign by British forces against the defenders of the East Java capital of Surabaya in November 1945.

To this day, it remains a bitter memory for older Indonesians.

In the author’s opinion, there are two main reasons why Britain, which did not hold colonial authority over Indonesia, launched the invasion.
First, there were psychological and emotional reasons at play, since Britain was victorious in World War II. Second, the British were bound by a treaty with the Dutch stemming from the conference at Yalta on Feb. 11, 1945, and the Postdam Declaration, which took place on July 26, 1945.

The objectives of the treaty were “to reestablish civilian rule, and return the colony to Dutch administration,” as well as “to maintain the status quo which existed before the Japanese invasion”.

They can be found in a letter dated Sept. 2, 1945 by the Allied Forces’ Supreme Commander South East Asia Vice Admiral Lord Louis Mountbatten. British assistance was also in line with the Civil Affairs Agreement between the Dutch and Britain in Chequers, Britain, on Aug. 24, 1945.

The author also outlines the violations committed by British troops. They include infringements upon the sovereignty of the fledgling nation of Indonesia, human rights abuses — including crimes against humanity and forced displacement — and war crimes.

Apart from its thorough dissection of this bloody chapter of Indonesian history, this book carries something else of equally important historical significance: an official apology from the British government. It was expressed by British Ambassador to Indonesia Richard Gozney in the name of the British government during a seminar on the Battle of Surabaya in Jakarta in October 2000.

It was a sympathetic act — one which has yet to be offered by the Dutch who, as a colonial power, ruled Indonesia for centuries.– 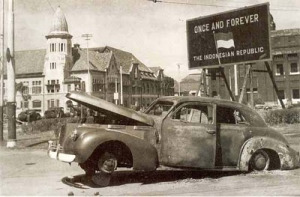